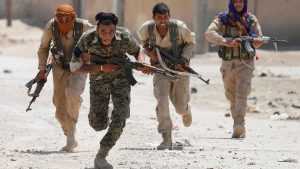 The Kurdish-led alliance, backed by US airstrikes, seized control of the al-Hawama neighborhood and the National Hospital in Hajin town, activist Taj al-Allow told Zaman al-Wasl.

SDF fighters have been attempting to take the last pocket of Syrian territory held by ISIS on the banks of the Euphrates for weeks, in an offensive backed by US-led airstrikes.

But the radical group has showed stubbornness and has advanced into SDF areas, killing and wounding dozens.

The US-led coalition, now pushing to defeat the final remnants of ISIS in Iraq and Syria, has previously said it investigates reports of civilian casualties and does all it can to avoid them.

Umarayn was responsible for killing several prisoners including US citizen Peter Kassig, an aid worker who was captured by the group in Syria and beheaded in 2014, McGurk said.

The US-led coalition is supporting a group of Kurdish and Arab militias assaulting the remaining Islamic State territory in eastern Syria, near the Iraqi border.

Late on Sunday, Syrian state media reported that the United States had fired missiles at Syrian regime positions in the desert in eastern Syria. The Syrian army last month said it had completed its own operation against an ISIS pocket in the south.