You are here: Home / MidEastGulf / US army deployed on Syrian border to prevent further Turkish attacks against Kurds 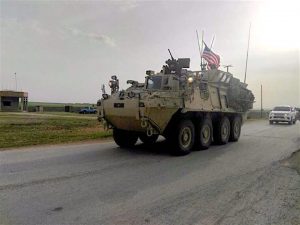 A delegation of the U.S.-led coalition was deploted on the Kurdish town of Derbassiye in Syria’s northeastern Hasakah province, to inspect the areas bombed by the Turkish army and took with them fragments of the explosives that were fired by the Turkish army on Kurdish positions, like reported by aranews.net .

“A delegation of international coalition leaders visited the region of Derbassiye. They were briefed on the areas bombed by the Turkish army,” Abdulkarim Omer, the Co-Head of Foreign Affairs of the local administration in the Cezire Canton said on Friday.

“Yesterday the Turkish army bombed Haddon village near Amude. There is a YPG centre on the mountain near the village. Also the Kharza village near Amude was bombed yesterday,” reported Heybar Othman, a freelance journalist working for international media.

“On Friday, US troops visited the border areas after Turkish attacks on the YPG. This is a message from the United States to Turkey to stop attacking the YPG, since they fear this could threaten the anti-ISIS Raqqa operation,” he added.

This however still leaves the region of Afrin vulnerable to more Turkish attacks, although there is also a Russian army presence there.

The delegation of the US Army included 8 commanders of the coalition accompanied by leaders of the Kurdish People’s Protection Units (YPG), according to local sources.

The commanders visited the villages of Arade, Bir Knes, Jetele, and Qarmane, which were targeted by the Turkish Army two days ago, beside inspecting the positions that were hit.

“US troops are now in an air base near Derbassiye, after inspecting the sites of Turkish shelling in the nearby villages,” local Kurdish journalist Can Mirzo told ARA News. “Kurdish Asayish forces were also deployed at checkpoints near the town and prevented strangers from entering the area,” he said.

The YPG said in a statement that the Turkish army continued to attack YPG forces and said they will strongly answer these attacks.

“Our forces have responded strongly to these attacks of the Turkish state. In the conflicts over the border, the Turkish army was inflicted heavy blows,” the YPG said.