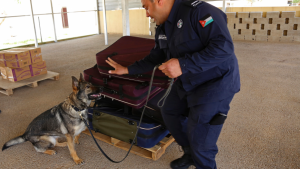 A German shepherd sniffed suitcases in an airport inspection drill, excitedly pausing near one bag from which a handler then pulled a satchel with plastic explosives.

The exercise at the compound of the Jordanian police canine unit, staged for visitors this week, is part of the U.S. State Department’s expanding Anti-Terrorism Assistance (ATA) program, like reported by foxnews.com.

The program has allocated $300 million this year to train and equip domestic security forces in partner nations — so far 21 out of a pool of 56. The aim is to improve the safety of U.S. diplomats and citizens abroad and to support U.S. allies.

In Jordan, a key U.S. ally in a tumultuous region, this includes training more explosives-sniffing dogs for airport duty, focusing on the departure gates of U.S. bound flights, and setting up cyber security training for local law enforcement agencies.

In recent years, Jordan has upgraded its fight against militants and criminals, in large part with U.S. backing, setting up a national emergency call center, a network of street surveillance cameras and databases for DNA, ballistics and fingerprints.

“I know that the teams we’ve trained, whether it’s a canine team or a crisis response team for the Public Security Directorate … have all discovered and disrupted terrorist plots, weapons and explosives that may have been attempted to be smuggled over the border,” he said in an interview late Tuesday in Jordan’s capital, Amman.

Jordan’s importance to Washington was apparent last month when the kingdom was promised $1.275 billion a year in U.S. economic and military aid through 2022, an increase of 27 percent — even though President Donald Trump had threatened to punish countries that don’t agree with U.S. policy in the Middle East. In December, Jordan had voted at the United Nations to condemn the U.S. for recognizing Jerusalem as Israel’s capital.

Davies said decisions on foreign aid are made elsewhere in the State Department, but that in his eight months on the job, he has seen an increase in counter-terrorism funding.

Jordan faces domestic and external threats from extremists, even though once powerful Islamic State militants have largely been defeated in neighboring Syria and Iraq.

Jordan’s economic woes, including high unemployment, have created fertile ground for militant recruiting. The government has arrested large numbers of suspected militant sympathizers, but critics say this fails to address underlying causes of lack of economic opportunity and a closed political system.

The Associated Press was given rare access this week to Jordanian law enforcement centers, such as the forensics lab and the call center. Retired U.S. law enforcement officers mentoring Jordanian counterparts said the local facilities are largely on par with those in the U.S.

The call center is housed in a massive castle-like building on the outskirts of Amman.

In a large hall, phones were ringing non-stop as call-takers responded to complaints and emergencies, with an average of 30,000 calls coming in every day.

One man said a car was blocking an exit at an Amman hospital. He gave the license plate number, and the dispatcher sent a patrol car. One line is set aside for calls by foreign embassies, which are given priority, said Brig. Eng. Rami al-Dabbas, the director of the center.

Live footage from street surveillance cameras streamed on screens mounted on a back wall.

Al-Dabbas said 720 cameras currently cover Amman and key locations elsewhere, including tourism sites, but that he needs another 3,000 to cover the entire capital.

Eventually, close to 11,000 cameras are to cover the kingdom, he said, adding that lack of funding is holding up such plans.

In one room, dispatchers were randomly checking car license plates shown on the security cameras against a database of wanted vehicles. Fifteen drones will be used for surveillance, including of illegal hunters, with six already in operation, al-Dabbas said.

Al-Dabbas said his center is one of the most advanced in the region, though several other countries, including the United Arab Emirates, have also developed sophisticated street surveillance.

In the UAE, surveillance footage helped authorities identify the woman who stabbed an American school teacher to death at an Abu Dhabi mall in 2014. It also aided Dubai police in identifying members of what it described as an Israeli hit squad that killed an operative with the Palestinian militant Hamas group in 2010.

Jordan’s crime lab, meanwhile, is expanding its databases. It has about 1.5 million sets of fingerprints, or of almost one-fourth of Jordan’s citizens, along with 150,000 DNA samples of criminal suspects and thousands of ballistics samples that help solve dozens of cold cases each month.

Lt. Col. Mohammed al-Dajeh, head of training in the criminal investigations department of Jordan’s police, said he has seen an overlap between criminal and terrorist networks. Terrorists looking for funding often engage in crime, and some of the militants have a criminal past, he said.

At the canine unit on the outskirts of Amman, German shepherds demonstrated their detection skills. The dogs sniffed out explosives hidden in the fuel tank of a car, under a fake rock along a sidewalk and in a suitcase.

The ATA program has trained 39 handler-dog teams, said Davies. In coming months, five more teams will be trained for special airport duty, sniffing laptops and mobile phones of passengers about to board direct flights from Jordan to New York, Chicago and Detroit. Airports in Egypt and Morocco will also add these security checks, he said.

The dogs won’t touch the electronics directly, in deference to local cultural and religious sensitivities, said Lt. Col. Ali al-Khaldi of the canine unit. He said the police will seek a religious ruling from a top Muslim cleric on how to deal with police dogs.