You are here: Home / Senza categoria / US and Russia meet to establish ‘agreed’ list of international terror groups 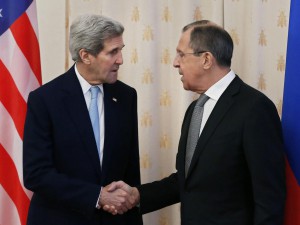 The US Secretary of State John Kerry is meeting with his Russian counterpart, Sergey Lavrov, in a bid to find “common ground” on the Syria crisis.

Briefing journalists before the meeting, Lavrov’s deputy Sergey Ryabkov said the main point for the discussion would be “agreeing a common list of terrorist organisations”.

It was the 20th meeting between the two men this year alone – and yet the divide between Moscow and Washington is worse than it has been for a generation.

Ryabkov said the establishment of a definitive list of terror groups was essential if progress is to be made in accordance with Vienna talks that are wider than the US-led coalition on Syria.

He added that the outcome of the talks, which will also touch on the long-running crisis in Ukraine, was hard to predict.

Mr Kerry will meet later with the Russian president Vladimir Putin, despite objections in Russia to American descriptions of the talks as “containment”.

“Even when there have been differences between us, we have been able to work effectively on specific issues,” Mr Kerry said as he began a series of what are expected to be difficult discussions in the Russian capital. “Today, I hope we can find some common ground.”

Russia and the US are militarily backing opposing sides in the Syrian conflict, and also fundamentally disagree over the role President Bashar al-Assad should play in the search for peace.

Mr Kerry nonetheless praised Moscow for having been “a significant contributor to the progress that we have been able to make” on Syria and said the US and Russia are united by the belief that Isis must be eliminated.

“Russia and the United States agree that this is a threat to everybody, to every country,” he said. “They are the worst of terrorists. They attack culture and history and all decency. It leaves no choice but for civilized nations to stand together, to fight and destroy them.”