You are here: Home / West Asia / US and Bangladesh together in fight against ‘emergence of Islamic State 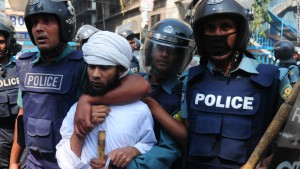 Dhaka and Washington have “everything” needed to fight Islamic State (IS) in Bangladesh, US ambassador Marcia Bernicat says.

Her comment follows the murder of two foreign nationals in Bangladesh within a week, for both of which the IS has claimed responsibility.

The government, however, denied the presence of IS in Bangladesh.

Earlier on Sunday, Bernicat told journalists in Chittagong that the US has taken “seriously” IS’s claim of responsibility for the two murders.

“….we are working hard right now with your government to verify whether or not those claims are accurate,” she had said.

“We have everything we need to fight the emergence of IS in Bangladesh,” she said.

“Bangladesh has a Prime Minister who has taken a zero tolerance approach to terrorism.

“As partners over the years, we have developed the resources, the commitment, and the shared experiences we need to counter terrorism and violent extremism,” she said.

Bernicat said terrorism was “a global issue that requires a coordinated, global approach”.

“And we are determined to work together with our shared partners for the safety and security of our countries,” she said.

This was her first interaction with the members of the Diplomatic Correspondents Association, Bangladesh (DCAB) since she took the charge in February this year.

She said there were “so many important stories” to share about the US – Bangladesh relationship.

“Our two countries have a common vision not just for our bilateral relationship, but for the region”.

“Let me be clear: the US – Bangladesh relationship is stronger than ever before and our interests are more closely aligned,” she said citing examples of engagements between the countries.

Those range from the countering violent extremism to health sector cooperation.

“We approach Bangladesh as our full-fledged partner, whether we are collaborating on security, development or economic issues,” Bernicat said.

She said US would continue to support Bangladesh to help it achieve the new sustainable development goals.

On the matter of reinstating GSP facility for Bangladesh, the US envoy said that it was an area that requires “more work”.