You are here: Home / MidEastGulf / US airstrikes kill Nusra Front commanders in Syria 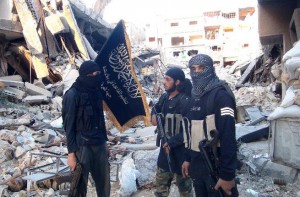 Seven members of Syria’s Al-Qaeda-affiliated Al-Nusra Front, including commanders, were killed in American-led air strikes Wednesday in the northwest of the conflict-riven country, a Britain-based monitoring group said, according to AFP.

The raids in Syria, which began last September, have mainly focused on the Islamic State group (ISIS) but its rival Al-Nusra has also been the target of some strikes.

“Seven Al-Nusra members, including commanders, were killed in at least five coalition air strikes against the group’s bases and a vehicle in Idlib province,” the director of the Syrian Observatory for Human Rights, Rami Abdel Rahman, told AFP.

Rahman could not confirm how many of those killed were commanders.

Most of Idlib province has been under the control of Al-Nusra and its rebel allies since they launched a large-scale operation earlier this year to expel Syrian President Bashar Al-Assad’s regime forces.

The United States is backing more moderate rebels in their fight against the Syrian regime. Like ISIS, Al-Nusra is blacklisted as a “terrorist organization” by Washington.

Al-Nusra Front has been an official branch of Al-Qaeda since April 2013. In addition to fighting the Assad regime, the group has clashed with Western-backed rebels and its jihadist rival ISIS.

Al-Nusra was part of a collection of jihadist rebel groups in Syria which became locked in fierce fighting with ISIS, after allegations that ISIS brutally abused civilians and other opposition fighters battling to topple Assad.

Syria’s conflict began in March 2011 with anti-government demonstrations but descended into a brutal war after a regime crackdown.

It has evolved into a complex battle with multiple fronts, and involving the regime, rebels, jihadists and Kurdish forces. More than 230,000 people have been killed in the fighting.