You are here: Home / West Asia / US airstrikes kill 30 Taliban in S. Afghanistan 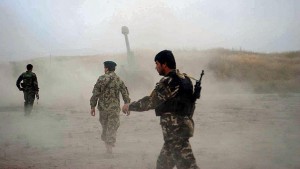 According to spokesman Mohamed Rasul Zazai, U.S. warplanes struck two Taliban positions in Helmand’s Margie area, killing 20 militants in the first airstrike and another 10 in the second.

Speaking to reporters, Zazai said the second strike had targeted a bomb-making facility, although he refrained from revealing the nature of the first raid’s target.

The spokesman added that the airstrikes had been carried out in coordination with Afghan security forces deployed in the region, stressing that they had not resulted in any civilian casualties.

Taliban spokesman Qari Yousuf Ahmadi, however, denied the army’s assertions, saying in a statement that all those killed in the twin U.S. airstrikes were civilians.