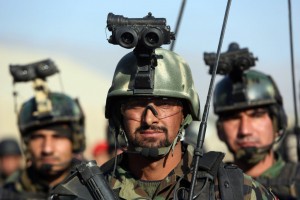 28 ISIS militants including 16 Pakistanis have been killed in U.S. and Afghan Security Forces drone strikes in eastern Nangarhar province of Afghanistan, local officials said on Saturday.

According to the reports the overnight attacks has happened in Achin and Bati-Kot districts of Nangarhar province.

16 Pakistani Daesh (ISIS) militants were killed when missiles fired by unmanned American aircraft struck a vehicle and a gathering of the group in a remote part of the mountainous district, Achin’s district governor, Haji Ghalib has told VOA News.

In a separate interview provincial officials have confirmed that Afghan security forces have killed 12 ISIS fighters and wounded several others in overnight clashes in Bati-Kot district of Nangarhar.

Nangarhar is among the volatile provinces in eastern Afghanistan where ISIS and Taliban insurgent groups are actively operating in a number of its districts.