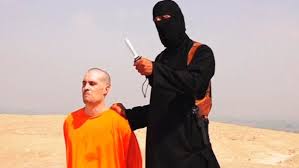 The British IS militant Mohammed Emwazi, known as Jihadi John, has been targeted by US forces in an airstrike, and is almost certainly dead.

The Pentagon is assessing whether the extremist was killed in the military action carried out in Syria.

Emwazi came to notoriety in a video in August 2014 which showed the beheading of US journalist James Foley.

He also appeared in videos showing the killings of UK hostages Alan Henning and David Haines, American journalist Steven Sotloff, aid worker Abdul-Rahman Kassig and Japanese journalists Kenji Goto and Haruna Yukawa shortly before they were killed, such as in this image.

A US official told the Associated Press a drone had been used to carry out the attack on a vehicle in Raqqa which was believed to be carrying Emwazi.

A Downing Street spokeswoman said: “We are aware of the US statement about the airstrike targeting Mohammed Emwazi. Like them, we are not commenting further at this stage.”

Mr Haines, an aid worker from Scotland, was executed in September last year, having been held captive for 18 months.

His daughter Bethany later said she felt families of Emwazi’s victims would only feel closure “once there’s a bullet between (his) eyes”.

His daughter Lucy said she found out he had been killed when she saw an image posted on social media site Instagram.

Emwazi appeared in the videos dressed in black with only his eves visible, and spoke with a British accent as he went on anti-western rants to the camera while wielding a knife.

It was not until February this year that the jihadist was unmasked as Kuwaiti-born Emwazi, who lived in the UK since the age of six.

It emerged that Emwazi had been known to British intelligence services, but managed to travel to Syria in 2013.