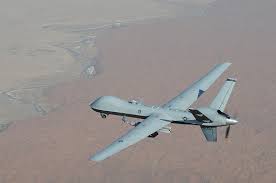 Three Al Qaeda militants who were driving in a vehicle in Yemen’s south were killed by a suspected US drone, Yemeni officials said according to thenational.ae.

The operatives were killed when an unmanned aircraft targeted their car late on Monday in the province of Shabwa, the Associated Press quoted the officials as saying. They spoke on condition of anonymity because they were not authorised to speak to the press.

Al Qaeda’s strongest arm, known as Al Qaeda in the Arabian Peninsula, is present in Yemen and has carried out a series of deadly bomb and shooting attacks in recent years, particularly in the country’s southern regions and against the military that operates in support of President Abdrabu Mansur Hadi — who leads the internationally-recognised government.

The United States is assisting Yemen in its battle to defeat the militant groups, tripling its number of air strikes in the country last year against Al Qaeda. But, while the US and its allies have managed to somewhat defeat ISIS in Iraq and Syria, the threat from the group and its extremist rival remains in Yemen.

The county was plunged into civil war more than three years ago. Al waeda and an ISIS-affiliate have exploited the chaos to expand their presence.