You are here: Home / MidEastGulf / US air strike kills IS militant linked to Benghazi attacks 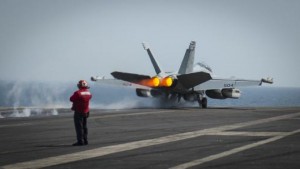 A US air strike on Mosul, Iraq, killed an Islamic State fighter linked to the 2012 attacks in Benghazi, Libya, that claimed the lives of US Ambassador Christopher Stevens and three other Americans, the Pentagon said.

Ali Awni al-Harzi, whom the Pentagon said was a “person of interest” in the September 11, 2012 Benghazi attacks, was killed in an air strike on Mosul on June 15.

“His death degrades ISIL’s ability to integrate North African jihadists into the Syrian and Iraqi fight and removes a jihadist with long ties to international terrorism,” Pentagon spokesman Colonel Steve Warren said, referring to the Islamic State (IS) group, which is also known as ISIL or ISIS.

Harzi was believed by officials to operate closely with IS militants throughout North Africa and the Middle East.

The US State Department described him as a “high-profile” member of a radical group in Tunisia who helped recruit volunteers to fight in Syria.