You are here: Home / MidEastGulf / US Air strike kills five terrorists In Yemen 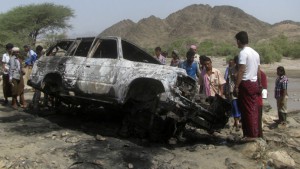 Five members of the al-Qaeda in the Arabian Peninsula (AQAP) terrorist organisation were killed in a US air strike, the US Central Command announced.

The strike took place in a remote area of Yemen’s Marib governorate, Central Command spokesman Josh T Jacques said in a statement, which did not disclose the identities of the terrorists killed in the strike.

“The al-Qaeda in the Arabian Peninsula remains a significant threat to the region and to the United States,” said Jacques, adding that the United States is working to deny the terror group a safe haven from which to plan future attacks.

Designated by the US State Department as a foreign terrorist organisation in January 2010, the Yemen-based AQAP has claimed responsibility for numerous terrorist attacks since its inception in 2009.