You are here: Home / Africa / US Air Force reveals there may have been another attempted terrorist attack in Niger 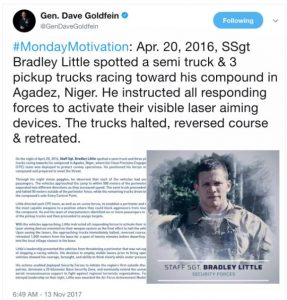 More than a month after a deadly ambush in Niger left four U.S. Army soldiers dead, the U.S. Air Force has revealed the existence of a second, possible terrorist attack in the country near the central city of Agadez. The details of this incident underscore the increasing risks American forces are facing while supporting largely unknown U.S. military missions from remote locations throughout North and West Africa, like reported by thedrive.com.

On the night of Apr. 20, 2016, Staff Sergeant Brady Little, a U.S. Air Force Security Forces airman from an unspecified unit, along with his comrades at the American base in Agadez successfully dissuaded a group of potential attackers who were approaching the site in three pickup trucks and semi-truck. U.S. Air Force Chief of Staff General David Goldfein posted an account of the incident on Twitter on Nov. 13, 2017, which the U.S. military does not appear to have acknowledged until now, ostensibly to highlight Little’s fast thinking. The service’s top officer combined the post with the hashtag “#MondayMotivation.”

According to the official narrative, the vehicles and their occupants appeared to be preparing for a complex attack. The semi-truck came to a stop less than 200 feet from the perimeter fence, while the three pickup trucks raced toward the facility’s only entry point.

Since at least September 2014, the U.S. has been working to create a new airstrip and associated facilities adjacent to the Nigerien Air Force’s Base Aerienne 201, itself attached to Agadez’s single-runway Manu Dayak International Airport. The 724th Expeditionary Air Base Squadron manages day-to-day American activities at the site. Security Forces airmen, such as Little’s “Close Precision Engagement” team support convoy operations connecting the site with the Air Force’s main base in Niger, which is situated in the country’s capital Niamey more than 450 miles to the southwest.

As the convoy of potentially hostile vehicles approached, Little had ordered other personnel to “move the most capable weapons” into a blocking position – possibly referring to up-armored Humvees with mounted .50 caliber M2 machine guns, which have appeared in official photographs from the base – and the American forces prepared to open fire. There is no mention in the Air Force’s account about the presence of Nigerien forces or private contractor security personnel during the incident. The Air Force’s account says unequivocally that this hasty defense would not have been enough to prevent the trucks from getting into the compound.

“With the vehicle’s approaching, Little instructed all responding forces to activate their visible laser aiming devices mounted on their weapon systems as the final effort to halt the vehicles,” the Air Force said in its summary of the events. “Upon seeing the lasers, the approaching trucks immediately halted, reversed course, and retreated 1,000 meters [approximately 3,280 feet] from the base for a span of twenty minutes before departing back into the local village closest to the base.”