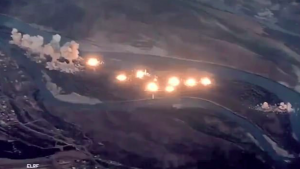 The US Air Force has dropped 40 tonnes of laser-guided explosives onto an island in northern Iraq they say is ‘infested’ with members of Isis.

A video posted by Colonel Myles B Coggins, the official spokesman of the coalition to defeat Islamic State, posted a video showing the mission on Twitter.

Vast explosions that created huge mushroom clouds were shown in the clip, while Iraqi counter-terrorism troops watch on.

The coalition said F15 and F35 warplanes took part in the bombing on Qanus island, that lies north of Iraq’s capital Baghdad.

“We’re setting the conditions for our partner forces to continue bringing stability to the region.”

The bombs were dropped to “disrupt Daesh the ability to hide in the thick vegetation”.

Terrorist group Isis were defeated in Iraq in 2017 but sleeper cells have continued to carry out deadly bombings in Iraq.

Major Hill added: “The pressure that we’re keeping on them keeps Daesh decentralised. We do see some unraveling of their communications.”

The bombings came as Donald Trump forced out John Bolton, his hawkish national security adviser with whom he had significant disagreements on Iran, Afghanistan and a cascade of other global challenges.

Since joining the administration in the spring of last year, Mr Bolton has advocated against Trump’s decision last year to pull US troops out of Syria.

He masterminded a quiet campaign inside the administration and with allies abroad to persuade Trump to keep US forces in Syria to counter the remnants of the Islamic State and Iranian influence in the region.

Trump said he would name a replacement for Mr Bolton next week.