You are here: Home / MidEastGulf / US adds ‘ex’ al-Qaeda group in Syria to terrorist list despite rebranding 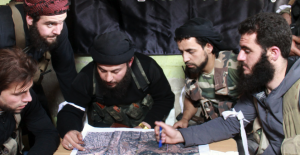 The US Department of State has amended the designation of al-Nusra Front as a Foreign Terrorist Organization, and added the ‘new alias’ of Jabhat Fateh al-Sham as a terrorist organization.

“U.S. persons are generally prohibited from engaging in transactions with Jabhat Fateh al Sham, and all property and interests in property of the organization subject to U.S. jurisdiction are blocked. In addition, knowingly providing, or attempting or conspiring to provide, material support or resources to the organization is prohibited,” the state department said.

In July 2016, al-Nusra Front leader Abu Muhammed al-Joulani announced his group would henceforth be known as Jabhat Fateh al Sham and distanced itself from al-Qaeda.

“Despite attempts to distinguish itself from al-Nusra Front by developing a new logo and flag, Jabhat Fateh al-Sham’s principles continue to be the same as those of al-Qaeda and the group remains committed to carrying out terrorist activity under this new name,” the US State Department said.

As a result, the US-led coalition continued to carry out airstrikes against the group in Syria, killing two of its members in the beginning of November.

“The United States and therefore the international Coalition is about to step up its operations against Jabhat Fateh al-Sham (JFS), al-Qaeda’s recently rebranded Syrian branch,” Kyle Orton, an analyst for the Henri Jackson Society wrote in a report.

“This is a necessary policy, but pursued in isolation—without replacing the capacities that JFS provides to the insurgency—this action will strengthen the coalition supporting the regime of Bashar al-Assad,” he said.