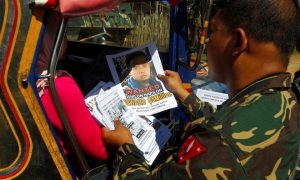 Abu Sayyaf Group, the Philippines most lethal and disruptive terror organization, is expanding its reach across the island nation, like reported by atimes.com . The expansion comes in apparent response to President Rodrigo Duterte’s military drive to eliminate the group entirely within this year.

It’s an increasingly important government imperative since ASG openly affiliated with Islamic State, raising the prospect the Islamist group could shelter and support fighters fleeing or returning from the battlefields of Iraq and Syria. ASG finances itself through kidnapping-for-ransom activities that have often targeted Western nationals.

Duterte has sought public support for both his peace initiatives and counterinsurgency campaigns to prevent ISIS from joining forces with local Islamist groups, many of which have fought against Manila for decades. Dozens of small armed groups have recently declared their allegiance to ISIS’ global jihadist cause.

Earlier this month, the Philippine defense establishment was caught off-guard when for the first time in ASG’s history it’s fighters launched a week-long surprise attack in the central Philippines – an upward migration to a traditionally peaceful region outside of the group’s volatile and wild southernmost stronghold in the Sulu peninsula.

Security officials reported that around 11 heavily armed ASG members sailed from Sulu and landed in the early dawn on the central island of Bohol in apparent search for possible kidnapping targets. The central island region, including Bohol and Cebu provinces, is home to several sites and destinations popular with foreign tourists.

A week before ASG’s attack, the US embassy in Manila had warned its nationals to in the region be vigilant when traveling in the central region due to heightened risks of possible ASG kidnapping activities in Cebu and Bohol. The Australian foreign ministry also recently released a travel advisory on the rising risks to its nationals in the Philippines.

Renowned for its kidnapping-for-ransom activities, and more recently piracy in the Sulu Sea, ASG’s head-on attack with government forces was staged well outside its traditional areas of operation. The gun battle reportedly killed six ASG fighters and four government soldiers near the once peaceful village of Napo Bohol’s Inabanga town.

The fighting displaced around 3,200 villagers who fled their home to avoid being caught in the crossfire. Many have stayed in evacuation centers due to fears of possible indiscriminate ASG reprisals.

Those fears seem justified. ASG sub-leader Muammar Askali, also known as Abu Rami, the son of a police officer who was previously a teacher in Sulu, was shot and killed in the firefight. Rami was believed to be responsible for beheading kidnapped Western tourists whose relatives failed or refused to pay ransom money for their release.

He is held responsible for the kidnapping of two Canadians, a Norwegian and a Filipina on Davao City’s Samal Island in September 2015. Rami’s group later beheaded Canadians Robert Hall and John Ridsdel when ransom negotiations failed. Norwegian Kjartan Serkingstad and Filipina Maritess Flor were freed after a huge ransom was paid to Rami’s group.

While Rami’s death has been trumpeted by security forces as a win in the fight against terrorism, some Sulu residents will view his demise with a measure of remorse. The Philippine Inquirer, a local English newspaper, quoted a local source saying that Rami had used some of his ransom money to feed impoverished communities where he resided.

Rami was reportedly being groomed to eventually take-over ASG’s leadership, which could explain his daring maneuver to expand the group’s franchise to Bohol.

Government sources say that Rami’s group had collected at least US$12 million since it accelerated and expanded its kidnap-for-ransom activities beginning in 2012. Those funds have reportedly afforded ASG’s leaders and top operatives increasingly luxurious lifestyles in one of the sprawling country’s most impoverished regions.

Philippine defense officials claim to have killed 116 ‘terrorists’ in the country’s restive southern regions since Duterte handed down last year a June 2017 deadline to eradicate ASG. His government has deployed 10,000 battle-tested soldiers to Basilan and Sulu in pursuit of that still elusive goal.

Indeed, ASG’s apparent recent expansion to the central Philippines has sent a dangerously different message that, rather than being contained, the terror group is instead expanding its kidnapping-for-ransom franchise into new regions popular with Western tourists and retirees.

But while government forces claim certain successes in known ASG-infested areas, it’s increasingly unclear where the shadowy terror group might strike next.