You are here: Home / Mediterranean / Up to 60 IS militants said killed in Sinai airstrikes

Egypt intensifies ground and air campaign to root out extremists affiliated with the Islamic State group. 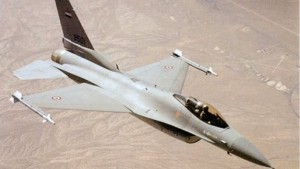 The attack, which was conducted by Apache helicopters, targeted installations belonging to the Wilayat Sinaa terror group around the town of Sheikh Zuwaid, which has long been a hotbed for extremist elements, the reports said.

Wilayat Sinaa, formerly known as Ansar Bayt al-Maqdis, pledged allegiance to IS in 2014 and has claimed responsibility for numerous deadly attacks on Egyptian soldiers and civilians over the past two years.

According to eyewitness reports, the aircraft continued to circle the area after the airstrikes in pursuit of terrorists who fled on motorcycles.

While some reports put the number of militants killed at 40, others said as many as 60 died in the attack.

Egypt has been trying to rein in Wilayat Sinai through an intensified military campaign called “Operation Right of the Martyr 2,” but has so far failed to quell the insurgency.

Wilayat Sinai made international headlines in November when it claimed responsibility for the downing of a Russian civilian airliner that killed all 224 on board. Following the incident, the terror ground released an official statement saying, “More than 220 Crusaders were on board. All were killed, praise God.”

Along with Saturday’s airstrikes, Egyptian military forces and police carried out ground operations in the areas of El-Arish, Sheikh Zuwaid, Rafah, and central Sinai to root out terrorists.

The operations involved artillery as well as special forces specializing in counter terrorism, Egyptian military sources told local media. According to the reports, the raids killed an unspecified number of militants and resulted in the capture and destruction of unregistered cars and motorcycles used by Wilayat Sinai.

Israel’s Channel 2 television reported in early December that Wilayat Sinai leader Shadi al-Menei had secretly crossed the border into Gaza where he met with leaders of the Hamas terror group’s military wing. According to the report, Hamas has smuggled weaponry from Gaza to al-Menei’s terror group, including the powerful Cornet anti-tank missile.