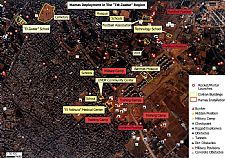 A United Nations report published Monday indicated that the terrorist group Hamas used three U.N. schools in the Gaza Strip for its own purposes during the July-August 2014 Operation Protective Edge, and fired rockets at Israel from two of them.

The report also stated that 44 Palestinians who sought shelter in U.N. schools during the fighting were killed by Israel Defense Forces fire and at least 227 were wounded.

U.N. Secretary-General Ban Ki-moon, presenting a summary of the report, vowed to “spare no effort to ensure that such incidents will never be repeated.”

“It is a matter of the utmost gravity that those who looked to them for protection and who sought and were granted shelter there had their hopes and trust denied,” he wrote in a cover letter accompanying the summary.

The schools were vacant at the time but Ban noted that “the fact that they were used by those involved in the fighting to store their weaponry and, in two cases, probably to fire from, is unacceptable.”

“I deplore the fact that at least 44 Palestinians were killed as a result of Israeli actions and at least 227 injured at United Nations premises being used as emergency shelters,” Ban wrote.

The U.N. Security Council is due to discuss the report on Tuesday, diplomats said.

Israel and Hamas, the Islamist group that dominates Gaza, said they would cooperate with the inquiry, launched by Ban in October and headed by retired Dutch General Patrick Cammaert.

Israel’s Foreign Ministry spokesman Emmanuel Nahshon said in a statement that all the incidents in the report attributed to Israel had been “subject to thorough examinations and criminal investigations have been launched where relevant.”

“Israel makes every effort to avoid harm to sensitive sites, in the face of terrorist groups who are committed not only to targeting Israeli civilians but also to using Palestinian civilians and U.N. facilities as shields,” Nahshon said.

Hamas denied that U.N. schools ever had weapons in them and claimed the report was a “clear condemnation” of Israel.

“We deny having any information about any weapons in the three UNRWA schools, which were empty from refugees, according to the report,” Hamas spokesperson Sami Abu Zuhri said.

The report cites at least five incidents in which the Israeli military fired at U.N. buildings, the most severe of which was at the Jabaliya‎ Elementary Girls School. At the time of the shelling 3,000 Gazans had been taking shelter in the school area, and according to the report 17 or 18 were killed.

“No prior warning had been given by the government of Israel of the firing of 155 mm high explosive projectiles on, or in the surrounding area of the school,” the inquiry said.

Ban said he had set up an ad hoc group of senior U.N. officials to advise him on possible future courses of action.