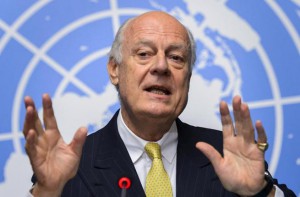 The UN’s Syria envoy Staffan de Mistura invited Syria’s government and opposition groups to talks in Geneva, set to start on May 4, AFP and Reuters reported.

De Mistura plans for the talks to last around four to six weeks.

Daesh and Nusra Front, which are classified as “terrorist organizations” were not invited to next month’s talks.

Mistura told Reuters that Iran was amongst the parties invited.

The upcoming month’s talks are the latest attempt to end the now four-year-old conflict in Syria.  Peace talks held in Geneva in early 2014 failed to mediate a resolution to the civil war.