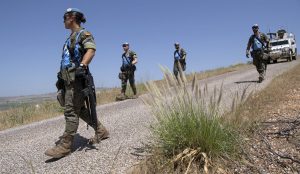 Thousands of UNIFIL peacekeepers, like Lt. Jorge Tejada from Spain, have been contributing to consolidate peace and stability in south Lebanon since 2006.

His patrol unit operates daily around the Marjayoun district and in the rest of their 78 square kilometer area of responsibility, and along the Blue Line ensuring stability in the area.

“There are many factors that we need to take into account when we patrol, and many activities and events that must be reported,” he says. “In addition to this, we also report on ongoing roadblocks and dangerous risk points that are identified on the ground, where incidents might happen.”

Jorge Tejada joined the mission about nine months ago. His work and that of his colleagues has been extremely vital in further strengthening the collaboration with the Lebanese Armed Forces (LAF) while conducting about 300 weekly coordinated patrols along the Blue Line to ensure that no hostile activities take place.

“When we are patrolling on our own, or with the LAF, we usually pass by some points that are considered as hotspots so to speak that are very close to the Blue Line and for this reason we have to keep monitoring those points daily to prevent any type of incidents or tensions between Lebanon and Israel,” he said.

For Tejada, outreaching and raising awareness about the Blue Line to the host communities is also an essential part of their operational activities.

“To give some examples,” he adds, “sometimes we meet shepherds who walk near the Blue Line and we have to keep our eyes wide open, talk to them and advise them on their movements so they don’t cross the Blue Line.”

While patrolling, a shepherd from the area was passing by with his flock. Lt. Tejada took this opportunity to chat with him and discuss about the situation in the village.

“We are very happy that you’re patrolling within this area. I am grateful to you and your units for constantly reaching out and talking to us when we are walking near the Blue Line.” He said.

UNIFIL daily vehicle and foot patrols, conducted by UNIFIL’s military personnel, in coordination with the Lebanese Army (LAF), are the most visible and vital component of UNIFIL’s mandate in south Lebanon.

These activities are an essential part in the implementation of UNSC Resolution 1701.

“Our daily operational activities that includes daily patrols are a must to ensure peace and security within our area of operations,” he added.

As one of UNIFIL’s 45 troop-contributing countries, the Spanish Contingent has over 600 peacekeepers. Serbian and Salvadorian peacekeepers are also integrated into their contingent deployed in three UN positions in Marjayoun district, south-eastern Lebanon.

Despite the ongoing COVID-19 pandemic, UNIFIL Spanish peacekeepers continue their vital work on the ground every day, while carrying out the Mission’s mandate.

As Lt. Tejada prepares for his departure by the end of July to join his family in Spain, a country that has also been affected severely by the pandemic, he is taking away with him “one of the best rewarding and inspiring experiences of my life while serving for peace.”

“Within this challenging period, being away from my family has been very hard, especially because Spain was strongly hit by COVID-19, but nevertheless, we have been able to stay in touch with the family on a regular basis,” he said.

“Most rewarding thing has been to be able to serve the mission during such a crucial and critical time for the country and the world, while providing peace and stability to an area where clashes can happen at any time,” he concluded.