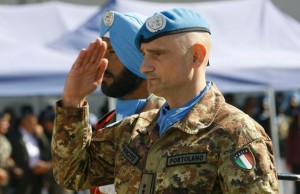 UNIFIL commander Maj. Gen. Luciano Portolano praised both the Lebanese and Israeli armies Tuesday for coordinating with the international force to maintain calm along the border.

“I find both the parties very focused on real issues on the ground, issues that go toward further strengthening the security infrastructure we have together established along the Blue Line,” Portolano said, according to a UNIFIL statement.

The Blue Line is a border demarcation made by the U.N. during Israel’s 2000 withdrawal from southern Lebanon. Portolano’s remarks came as he chaired a routine tripartite meeting of senior officers from both armies at a UNIFIL post in the Lebanese coastal village of Naqoura.

“Where there are gaps, they are working with UNIFIL to fill them. Where there are localized problems, we are actively seeking agreed practical solutions. … I am very encouraged by the positive engagement of the parties with UNIFIL.”

The meeting was focused on U.N. Security Council Resolution 1701, including the situation along the border, air and ground violations, efforts to visibly mark the Blue Line, and the withdrawal of the Israel army from the northern part of the border village of Ghajar.