You are here: Home / Mediterranean / Unifil in Lebanon: a new road in Kfar Shouba 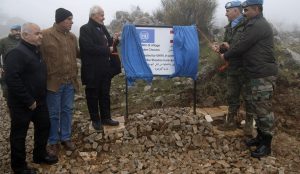 Winters are harsh in Kfar Shouba on both locals and UN peacekeepers, as well as infrastructure. During the winter, the limited width of the road that leads to this faraway south-eastern Lebanese village – combined with snowstorms, rains and poor road conditions – is a safety hazard for all.

He told a group of dignitaries, including the mayor, village elders, religious leaders, and Lebanese Armed Forces (LAF) representatives that the road is essential for the community and the UN Mission alike.

“UNIFIL has contributed to the first stage of this project with the expansion and rehabilitation of the village road in this area, in partnership with the Municipality of KfarShouba,” he added.

The rehabilitated road will provide better safety conditions and will contribute to long-term development of this community.

This road is a vital artery for the local farmers for reaching their agricultural lands and the pond, which is the main source of agricultural water in the village. It is also an essential road for coordinated military operations, regularlyused by UNIFIL and LAF personnel to carry out their duties daily.

The Mayor of Kfar Shouba, Kassem Qadri, said the road, first built in the 1980s, represents the only path available for the local communities to access their agricultural lands and farms.

“Over the four decades since it was built, this road has sustained a lot of damages due daily heavy use by military and civilian vehicles,” he added. “The Municipality Council, in cooperation with UNIFIL, managed to complete the first phase of this project which will benefit the local population, as well as UNIFIL and the Lebanese Armed Forces.”

The successful implementation of this project will enhance livelihoods.

Local villagers hope that a much better, all-weather good road will bring security, peace and stability to an area marred by daily heavy use of military and civilian vehicles.A decent road, among other benefits, enables UNIFIL peacekeepers and LAF soldiers to continue to carry out necessary operational activities.

Between their core peacekeeping duties, UNIFIL peacekeepers regularly carry out various activities in support of and as requested by the host communities, which – together with their operational activities – have helped keep calm in the Mission’s area of operation for over 13 years.