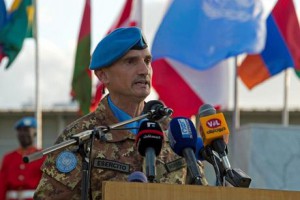 United Nations Interim Force in Lebanon (UNIFIL) Commander Maj. Gen. Luciano Portolano stressed on Wednesday that Israel is obligated to withdraw from the northern section of the village of Ghajar, as well as the areas adjacent to the Blue Line in accordance with U.N. Security Council resolution 1701.

“Its presence in the area violates resolution 1701,” Portolano said in an interview with As Safir newspaper.

He pointed out that the matter is “nonnegotiable as the territory is Lebanese.”

“We have been firm in discussing the issue during all our bilateral and tripartite meetings with Israel,” Portolano said, considering it as a “priority.”

The U.N. official revealed that the UNIFIL “offered all the necessary facilitations to guarantee Israel’s withdrawal from the area,” however, the Jewish state didn’t respond to any of the demands.

Resolution 1701, which ended the Hizbullah-Israel war in 2006, expanded the mandate of U.N. troops in the South, which was originally formed in 1978 after the outbreak of Lebanon’s 1975-1990 civil war.

It imposed a strict embargo on weapons destined for Lebanese or foreign militias in Lebanon, and pressed Israel to end violations of Lebanon’s airspace and to withdraw from northern Ghajar.

“Since resolution 1701 was issued, the South witnessed yet its calmest periods in decades… All parties respect the Blue Line and responded to UNIFIL’s efforts to prevent any escalation by containing all incidents.” Portolano noted.

The official said that “the security situation in the South is strategically different today than it was in 2006 due to the exerted endeavors by the UNIFIL and the Lebanese Armed Forces.”

“The situation in the area of operations of peacekeepers is currently stable.”

Portolano said that amid the regional developments, the UNIFIL is keen to guarantee the stability of the Blue Line.