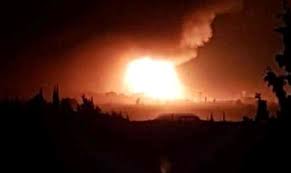 Unidentified aircraft attacked Iranian militias near the town of Al Bukamal in northeastern Syria near the Iraqi border on Monday night, a website affiliated with Syrian rebel groups reported according to israelhayom.com.

A source who spoke with Deir Ezzor 24 said strong blasts were heard in the area of Al Bukamal, where Iran-backed Shiite militias are based. According to the source, the explosions were apparently caused by missile impacts.

Also Monday night, meanwhile, news outlets in the war-torn country reported that a bus carrying Syrian soldiers came under machine-gun fire in eastern Deir ez-Zor. According to initial assessments, the attack was carried out by Islamic State fighters. Several Syrian soldiers were reportedly killed in the attack.

According to Hezbollah-affiliated Al Mayadeen TV, based in Beirut, several bases were hit in the attack, which was carried out by unidentified warplanes. Other outlets reported that several Iranian nationals were wounded in airstrikes on the Imam Ali base, Iran’s flagship project in Syria.

The Imam Ali base, and the designated border crossing adjacent to it, facilitates the transfer of weapons on land from Tehran through Iraq and Syria to Beirut, relieving Iran of the need for air bases that could be neutralized in a broad Israeli airstrike. The base is slated to house a large and well-armed military force, perhaps even armed with long-range missiles.