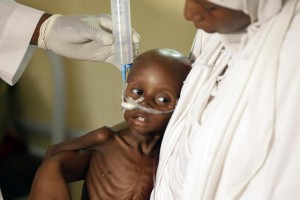 Tens of thousands of “trapped” Nigerian children face death next year and hundreds of thousands more will starve in a humanitarian crisis caused by Islamist extremist group Boko Haram, Unicef has warned.

The United Nations’ agency for children said 80,000 young people in north-east Nigeria are acutely malnourished and need urgent treatment or they will perish in the famine-like conditions.

Boko Haram has wreaked havoc in Africa’s most populous country with its seven-year fight to topple the government and create an Islamic state — killing more than 20,000 people and creating 2.6 million refugees.

“We are extremely concerned about children trapped there. We estimate 400,000 will suffer severe acute malnutrition over the next year.

“Without the treatment they need, one in five  of them will die. Farming has been disrupted and crops destroyed, food reserves depleted and often pillaged and livestock killed or abandoned.

“In Borno, where fighting has been most brutal, 75 per cent of the water and sanitation infrastructure and 30 per cent of all health facilities have been either destroyed, looted or damaged.”

Doctors Without Borders said last month that thousands of children had already died, including up to a quarter of youngsters admitted to its emergency treatment centre in Maiduguri, the biggest city in Nigeria’s north-east and the birthplace of the insurgency.

A multi-national force of soldiers from Nigeria and neighbouring countries has pushed Boko Haram out of towns and many villages they occupied.

But attacks on military outposts and suicide bombings on soft targets continue, despite president Muhammadu Buhari’s claim that Boko Haram was “technically defeated” a year ago.

The UN has doubled its humanitarian funding appeal for north-east Nigeria to £790 million next year. Nigeria is probing allegations food aid that could help prevent deaths was being diverted.