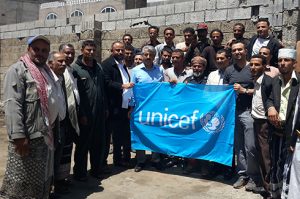 In recent times, UNICEF has partnered with radical organizations pursuing pro-Palestinian and Islamist agendas.  NGO Monitor produces and distributes critical analyses and reports on the activities of the international and local non-governmental organization (NGO) networks. It has just issued a scathing report claiming that UNICEF’s Occupied Palestinian Territory (oPt) branch is working with radical anti-Israel NGOs to add the Israel Defense Forces (IDF) to a UN blacklist of “grave” violators of children’s rights, like reported by frontpagemag.com.

Each year, the UN Secretary General publishes a report on “Children and Armed Conflict,” which, since 2001, has included an “annex” listing “parties to armed conflict” that engage in certain practices that fundamentally violate the rights of children. This annex is regarded as a blacklist of villainous entities that harm children. Palestinians and their advocates are seeking to abuse the process by enlisting UNICEF to do their dirty work in demonizing Israel yet again.

“The UN blacklist consists almost entirely of terror groups and militias from failed states,” according to the NGO Monitor report. “In essence, by pushing for the Israel Defense Forces’ (IDF) inclusion on the list, UNICEF and its NGO partners are claiming that Israel’s army is equivalent to ISIS, Boko Haram, the Taliban, and Al Qaeda.”

The pro-Palestinian advocacy groups spoon-feeding libelous information to UNICEF about IDF include organizations that have links to the Popular Front for the Liberation of Palestine, which is listed as a terrorist organization by the U.S., EU, Canada, and Israel. Talk about the pot calling the kettle black.

Rather than follow its own stated guidelines of neutrality, impartiality, independence and credibility, UNICEF has allowed itself to become an instrumentality of virulent anti-Israel groups to exploit concerns over violence against children for the sole purpose of delegitimizing the Jewish state of Israel. The so-called “working group,” put together to ostensibly engage in objective fact-finding regarding alleged instances of grave violations against children, was dominated, according to the NGO Monitor report, by non-governmental “organizations that have alleged ties to terrorist groups and/or are prominent actors in anti-Israel BDS (boycott, divestment, and sanctions) and lawfare campaigns.” The result is that “the NGOs’ factually inaccurate and biased narratives feed directly into the UN system.” The NGO Monitor report further explained that “UNICEF and the NGO members of the Working Group are active in a coordinated attempt to place Israel on the Secretary-General’s Annex, and UNICEF sees its work as serving this purpose.”

Not only are the anti-Israel narratives blatantly false. They are one-sided. UNICEF has been silent on Hamas’s use of children as human shields, while actually accusing the IDF of using Palestinian children as shields. UNICEF claimed in a 2010 report that there is “no evidence of systematic attempts to recruit children to Palestinian armed groups for training or operations,” although it acknowledged a few “individual cases” and “anecdotal reports” of such recruitment without further comment. In a bulletin published on December 22, 2017, UNICEF claimed that it was “not in a position to document cases of child recruitment and use of children” by armed groups in Gaza, where Hamas is in charge.

UNICEF also reduces the number of Israeli children killed by Palestinian terrorists to the level of statistical afterthoughts. It has ignored the psychological trauma visited on Israeli children when the sirens blare and the children have 15 seconds to run for cover to escape incoming Hamas rockets.

UNICEF has not limited itself to the Palestinians in partnering with a terrorist-affiliated organization.

UNICEF has also played a role in whitewashing Sharia law when it comes to children. In 2005, UNICEF co-authored a report with the International Islamic Center for Population Studies and Research of Al-Azhar University. The report made false claims about how well children were treated under Sharia, claiming it “pays utmost attention to securing all that is needed to guarantee a wholesome psychological climate for the rearing of children, a climate wherein they learn about the world and formulate their customs and norms.”  Sharia law is not guaranteeing a “wholesome psychological climate” for children when girls are taught that they don’t deserve the same rights as boys because women are inferior to men, when child marriage is permitted, or when children are taught to hate any enemy of Islam, particularly the Jews.

Against all this background, UNICEF’s denial of the NGO Monitor’s characterization of UNICEF’s role in trying to add IDF to the UN children’s rights violators blacklist rings hollow. UNICEF’s spokesperson claimed that UNICEF’s “role, working with select partners on the ground, is to collect data on grave violations against children, verify it using multiple sources and share it with the Office of the Special Representative for Children and Armed Conflict who then passes it on to the Secretary-General for review and decision.” The spokesperson added that its working group brings together UN agencies and international, Israeli and Palestinian NGOs, which “are selected based on their ability to regularly provide accurate, reliable, impartial and objective data on children affected by armed conflict.” Nothing of the kind happened in this case. The NGO Monitor’s detailed factual account of the anti-Israel NGOs involved, and the manner in which they collaborated with UNICEF towards a common objective, undercuts UNICEF’s attempt to insulate itself from the nefarious scheme it facilitated with those NGOs to demonize Israel.

President Trump’s proposed spending budget for 2018 would reduce funding for UNICEF by 16 percent. That’s not enough unless UNICEF reforms itself very soon and stops serving as a shill for anti-Israel Palestinian activists and Islamists.