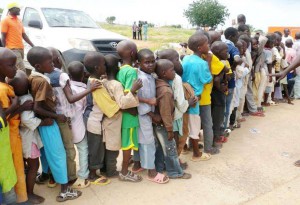 The U.N.’s children agency says 1.4 million children overall are “on the run” in Nigeria and neighboring countries where the group has sown terror in recent months. More than half of the 1.2 million children who have fled northern Nigeria alone are under 5 years old.

Spokesman Christophe Boulierac says the agency is in “full operational mode” in the region but has received less than one-third of the $50 million funding it has sought for the Lake Chad region.

Speaking Friday at a U.N. news conference in Geneva, Boulierac also appealed for renewed attention on the 219 girls abducted in April 2014 from a school in Chibok.