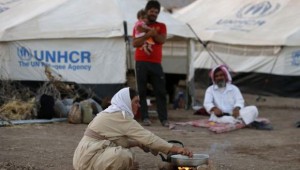 UNHCR is making final preparations for a huge airlift of humanitarian aid into Yemen’s Sana’a, to take place over the next days if today’s proposed ceasefire comes into effect and holds.

Hundreds of thousands of people across Yemen are struggling to meet their basic needs and are in desperate need of help. UNHCR’s most recent shipment of aid by sea arrived at Hodeida port on the Red Sea coast last Friday, containing blankets, sleeping mats, and kitchen utensils for 60,000 people. But there is clear and urgent need for aid to reach many more people.

The plan for the airlift is for three flights carrying aid from our stockpiles in Dubai. These will bring 300 tonnes of sleeping mats, blankets, kitchen sets and plastic sheeting – part of a larger aid mobilisation underway for a quarter of a million people.

In addition to the flights, UNHCR will be seeking to distribute more of the aid we already have in Yemen, and to carry out rapid needs assessments in previously hard-to-reach areas. Our staff and partners are preparing to give relief kits out to tens of thousands of displaced people. This includes those who in recent days fled airstrikes on Sa’ada, about 150 kilometres to the north of Sana’a. Many of these people left on foot, and are living in public buildings. Our teams will be taking relief to 21,000 of the most vulnerable in Amanat Al Asmimah, Amran and Hajjah governorates in the north of Yemen. In the south, we hope to be able to send more aid to Aden, Lahj, Abyan and Shabwa for 17,500 vulnerable people.

While a humanitarian pause falls short of the peace so vitally needed in Yemen, it is nonetheless critically important that aid gets through, as existing stocks in country are becoming depleted, adding to the suffering of civilians.

UNHCR’s plan is to also use any pause in hostilities to transport and preposition aid to Sana’a, Amran, Haradh and Aden for onward distribution to vulnerable populations in surrounding provinces. Medicines and rations will be sent to the Mayfa’a reception centre in the east, and food, kerosene and diesel will be transferred to the Kharaz refugee camp, near Aden. About 2,000 Somali refugees have moved from urban areas in Aden to the Kharaz camp since the escalation of hostilities six weeks ago. While many of these have been able to move into the shelters of relatives, a growing number of new families have arrived and we have had to provide additional tents.

We also hope to redouble our protection activities for refugees and asylum-seekers during the ceasefire. Through our telephone hotlines, our staff has received requests from some migrants who now wish to register as asylum-seekers because of problems they are now facing. Many other refugees who previously survived as daily labourers or domestic staff have lost their livelihoods in the conflict and need cash assistance. We hope to also resume our meetings with refugee community leaders and other outreach activities, which – until now – have been severely hampered in the dire security situation.

For our own staff, many of whom have been forced by the fighting to work from home where electricity is in short supply, we will be distributing solar batteries and panels. Sana’a has gone for days without any electricity, while parts of Aden still have no power at all.

UNHCR, with our humanitarian partners, urges all parties to observe the ceasefire in full, to respect International Humanitarian Law and cease any targeting of civilians or civilian infrastructure, and to allow the urgent delivery of aid to tens of thousands of vulnerable Yemenis and refugees who desperately need some respite.

Across Yemen, more than 300,000 civilians have been displaced in the recent conflict, which has also affected many of the 250,000 mainly Somali refugees in Yemen alongside the 330,000 people already internally displaced by previous waves of conflict. In addition, some 27,000 people of various nationalities have fled the country in the last six weeks to the surrounding region.