You are here: Home / Mediterranean / “UN Won’t Stop ISIS Even if it Beheads Everyone in Libya” 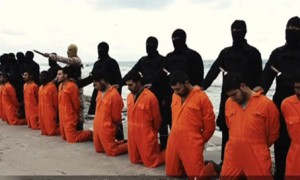 Since the “Arab Spring,” Libya has been divided into areas controlled by the temporary government, militia forces aligned with the Muslim Brotherhood, and Islamic State (ISIS) – and it appears the UN has no intentions of returning stability to the fractured north African state and stopping ISIS’s march in the country.

The temporary government, headed by Prime Minister Abdullah al-Thani and centered in the eastern city of Al Bayda, has issued a call to the UN Security Council (UNSC), asking for immediate intervention to prevent ISIS massacres in the city of Sirte in the west of the country.

However, Libya’s Ambassador to the UN Ibrahim al-Dabashi expressed his pessimism that the Security Council would in fact take action.

In an interview with the London-based Arabic paper Asharq Al-Awsat, al-Dabashi said on Sunday that the UNSC will not agree to arm the Libyan army before a national consensus government is formed – even if ISIS conquers all of Libya and beheads all of its citizens first.

Al-Dabashi accused the Security Council of “encouraging” the massacres conducted by ISIS and being partners to the crimes.

According to the UN representative, every weapon-bearing Libyan citizen who does not take part in the war against ISIS is a “coward” and is an accomplice to the crimes, and they should expect to be killed like the rest when ISIS arrives.

Many families have fled Sirte, the birthplace of Libya’s former ruler Muammar Gaddafi, after ISIS executed 73 youths there including children under the age of 14, and proceeded to burn their bodies on the coast. ISIS likewise beheaded 12 others and crucified their bodies.

ISIS’s presence in Libya hit headlines in February when it broadcast the brutal mass execution of 21 Coptic Christians, triggering reprisal air raids from Egypt and a mass-exodus of Egyptian workers from the country.

In March, ISIS terrorists published a video in which they vowed that their conquest in Libya will serve as a springboard for a European invasion.