You are here: Home / Mediterranean / UN votes on extending mandate of Unifil’s peacekeepers in southern Lebanon 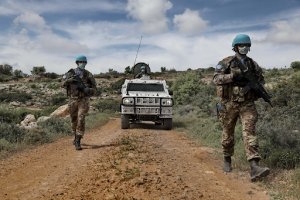 The UN Security Council is voting on a resolution that would extend the mandate of the UN peacekeeping mission in southern Lebanon for a year but reduce its troop ceiling from 15,000 to 13,000 in response to US pressure, like reported by toi.com.

The French-drafted resolution also makes another concession to the Trump administration and its close ally Israel. It calls on the Lebanese government to facilitate “prompt and full access” to sites requested by UN peacekeepers for investigation, including Hezbollah tunnels crossing the UN-drawn Blue Line between Lebanon and Israel.

The draft urges freedom of movement for UNIFIL and unimpeded access to all parts of the Blue Line, and condemns “in the strongest terms” all attempts to restrict UN troop movements and attacks on mission personnel.

The resolution, if approved, would give the United States a symbolic victory, but it would also almost certainly be welcomed by many countries that view UNIFIL as critical to maintaining peace in the volatile region and strongly support its current mandate which is largely maintained.

While the resolution’s adoption would reduce the troop ceiling from 15,000 to 13,000, it would not require any cuts in the current peacekeeping force. That’s because UNIFIL’s current strength is about 10,250 troops, well below the ceiling.

Because of the COVID-19 pandemic, the 15 members of the council are voting on the resolution by email. Voting began Thursday afternoon and ends Friday afternoon. The Security Council president, Indonesia’s UN Ambassador Dian Triansyah Djani, said results will be announced Friday evening.

The vote began a day after Israel’s envoy to the United Nations Gilad Erdan told the international body that a shooting attack carried out earlier in the week by a Hezbollah cell toward IDF troops, took place between two UN posts, barely 110 yards from the closer one.

UNIFIL said it was launching an investigation into the incident.

UNIFIL was created to oversee the withdrawal of Israeli troops from southern Lebanon after a 1978 invasion. The mission was expanded after a 2006 war between Israel and Hezbollah so that peacekeepers could deploy along the Lebanon-Israel border to help Lebanese troops extend their authority into their country’s south for the first time in decades.

Israel has repeatedly accused Hezbollah, which is backed by its greatest foe Iran, of impeding the peacekeepers from carrying out their mandate, a view strongly backed by the Trump administration.

In 2019, Israel destroyed a series of what it said were attack tunnels, dug under the border by Hezbollah. The terror group battled Israel to a stalemate in a month-long war in 2006.

Israel’s then-ambassador to the UN Danny Danon said in May that Israel would insist that peacekeepers have access to all sites, that they have freedom of movement and that any time they are being blocked the Security Council must be immediately informed.

US Ambassador Kelly Craft tweeted at the time that UNIFIL has been “prevented from fulfilling its mandate” and “Hezbollah has been able to arm itself and expand operations, putting the Lebanese people at risk.”

She said the Security Council “must either pursue serious change to empower UNIFIL or realign its staffing and resources with tasks it can actually accomplish.”

The resolution being voted on recognizes “that UNIFIL has successfully implemented its mandate since 2006 and has allowed for maintaining peace and security since then,” and therefore the Security Council would authorize the reduction of the troop ceiling from 15,000 to 13,000.

The draft resolution states that the force strength can be increased in the future in the event of “a degraded security situation.”

According to UNIFIL, it currently has about 10,250 troops including more than 9,400 ground troops and over 850 naval personnel assigned to its Maritime Task Force. In addition, the mission has about 900 civilian staff, both international and national.

The draft resolution would affirm the Security Council’s “strong continuing commitment to the existing UNIFIL mandate.” And it would reaffirm the necessity that Lebanon’s armed forces deploy in southern Lebanon and its territorial water “at an accelerated pace” to implement a key mandate provision.

The draft asks UN Secretary-General Antonio Guterres to present the first elements of a plan to improve UNIFIL’s “efficiency and effectiveness” within 60 days.

On another US and Israeli issue, the resolution would reiterate the council’s call for “the rapid finalization” of investigations into all attacks against UNIFIL in order to bring the perpetrators to justice. And it would request the secretary-general “to report to the Council, within a reasonable time frame, when such incidents occur.”