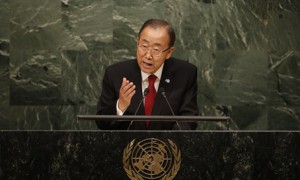 UN Secretary-General Ban Ki-moon called on Iran to impose a moratorium on executions after two juvenile offenders were hanged in the past two weeks, AFP reported.

Ban said he was “deeply saddened” by the executions and recalled that Tehran had signed two international conventions outlawing the death penalty for children under 18.

Fatemeh Salbehi, a 23-year-old woman, was hanged in the province of Fars on 13 October after being found guilty for killing a man she had been forced to marry when she was just 16.

A week earlier, Samad Zahabi was hanged in Kermanshah province for shooting a fellow shepherd when he was just 17.

UN human rights experts said Iranian authorities did not provide the required notice to Zahabi’s family or lawyer ahead of the hanging.

Ban said he was “concerned that these two executions reflect a worrying trend in Iran”, where he said more than 700 people have reportedly been executed so far this year, including at least 40 publicly.

He said that was the highest total recorded in the past 12 years.

Earlier this summer, Iran launched an “execution spree“, executing an average of three people per day, with nearly 700 people executed in the first half of 2015 alone, many for political crimes or on trumped-up charges, according to an Amnesty International report at the time.

Iran has claimed that 93 percent of executions in the country involve drug smuggling, a fact which Ban confirmed on Monday, but also noted that drug-related crimes “do not meet the threshold of the ‘most serious crimes’ as required by international law.”