You are here: Home / Africa / UN says 32 staff killed on duty – most deaths in Mali 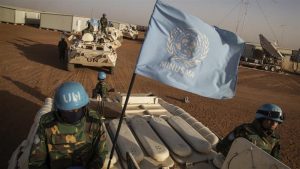 The United Nations Staff Union says 32 people working for the world body were killed in the line of duty in 2016, including 26 peacekeepers, according to ap.org.

The union’s security committee said Tuesday that in the past five years almost 240 U.N. personnel have died in deliberate attacks.

Last year’s death toll was lower than in 2015, when at least 51 U.N. and associated personnel were killed in the line of duty, the highest number ever recorded by the committee.

For the third year in a row, the committee said, the greatest loss of life in 2016 was in Mali, where at least 23 U.N. personnel were killed by ambushes, landmines and bombings.

The committee called on Secretary-General Antonio Guterres to mobilize resources to ensure the safety of U.N. personnel.