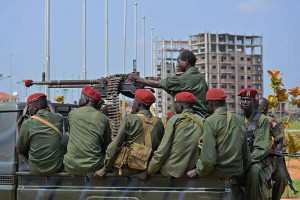 UN human rights experts on Thursday said “ethnic cleansing” was under way in South Sudan after visiting the country where violence has soared since a peace deal collapsed in July.

“There is already a steady process of ethnic cleansing underway in several areas of South Sudan using starvation, gang rape and the burning of villages; everywhere we went across this country we heard villagers saying they are ready to shed blood to get their land back,” said Yasmin Sooka of the UN Commission on Human Rights in South Sudan.

“Many told us it’s already reached a point of no return.”

Sooka was part of a three-member team which travelled to battleground towns including Bentiu, Malakal and Wau to gather facts about the situation in the world’s youngest country.

Jarring testimony gathered by the team during their 10-day visit shows a nation on the brink of “catastrophe”, said a statement issued by the commission.

“The stage is being set for a repeat of what happened in Rwanda and the international community is under an obligation to prevent it,” said Sooka.

At a press conference in Juba on Wednesday, Sooka warned of “unprecedented levels of violence and ethnic tension” without using the term ethnic cleansing, a war crime closely related to genocide which refers more to groups being forcibly removed from a particular area.

Hopes that an August 2015 peace deal would bring peace to the young nation were dashed when fighting erupted in Juba in July, leading to a surge of violence around the country characterised by divisions between the country’s 64 tribes.

STILL TIME TO PREVENT IT

Sooka said on Wednesday that government and rebel armies were both forcibly recruiting soldiers — including children — and warned that “renewed recruitment is an indicator that all the parties are preparing for the next conflict”.

She said fighting was expected to get worse as the dry season settles in.

Keith Harper, the US ambassador to the UN rights council warned that the government appeared to be preparing for large scale attacks, and had in the past two weeks mobilised at least 4,000 militia fighters to the southern Equatoria region.

Among the atrocities reported to the commission was widespread gang rape, with some women unable to receive medical treatment for the complications suffered after sexual attacks.

“The scale of rape of women and girls perpetrated by all armed groups in South Sudan is utterly unacceptable and is frankly mind boggling,” said Sooka.

“Aid workers describe gang rape as so prevalent that it’s become ‘normal’ in this warped environment.”

After decades of civil war South Sudan gained independence from Sudan in July 2011.

However hopes of a fresh start for the oil-rich nation were quickly dashed as internal political divisions burst to the surface, fracturing the government and people along ethnic lines with devastating consequences.

Sooka said that many of the warning signals of impending genocide are already there.

“An existing conflict, resort to polarised ethnic identities, dehumanisation, a culture of denial, displacement based on ethnicity and in some places indications of systematic violations and planning — but the important thing is there is still time to prevent it,” she said.