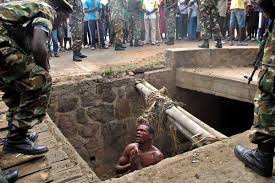 Burundi has suffered a worsening wave of violence since President Pierre Nkurunziza said he would seek a third term his opponents say is illegal. At least 439 people have been killed in the violence and 200,000 have fled the country.

Zeid said the United Nations had documented 13 cases of sexual violence with a pattern of security forces allegedly entering the victims’ houses, separating the women and raping or gang-raping them.

During the searches, police, army and Imbonerakure militia forces also arrested many young men who were later tortured, killed or taken to unknown destinations, Zeid said in a statement.

Western powers and African states fear Burundi’s crisis, which has so far largely followed political allegiances, could spiral into a renewed ethnic conflict, potentially spilling over into Rwanda and Democratic Republic of Congo.

Burundi’s 12-year civil war, in which some 300,000 people were killed and which ended in 2005, pitted an army led by the Tutsi minority against rebel groups of the Hutu majority. Nkurunziza is a former leader of a Hutu rebel group.

“All the alarm signals, including the increasing ethnic dimension of the crisis, are flashing red,” Zeid said.

Burundi has the same ethnic mix as Rwanda, which witnessed a genocide in 1994 – about 85 percent Hutus and 15 percent Tutsis.

The United Nations is analyzing satellite images to investigate witness reports of at least nine mass graves in and around the capital Bujumbura, including one in a military camp, containing more than 100 bodies in total, all of them reportedly killed on December 11, 2015, Zeid’s statement said.

One of the sexually abused women testified that her abuser told her she was paying the price for being a Tutsi. Another witness said Tutsis were being systematically killed, while Hutus were being spared.

“And, in the Muramvya neighborhood, the decision to arrest people was also reportedly largely made on an ethnic basis, with most Hutus being released, according to several different witnesses,” Zeid’s statement said.

Scott Campbell, head of the U.N. human rights office’s West and Central Africa office, said Nkurunziza was under enormous political and economic pressure to open talks with the opposition, adding there was “no credible dialogue” at present.

“The national budget has been virtually chopped in half for 2016, the government is having difficulty paying salaries, most importantly the impact on the population is being felt,” Campbell told a news conference in Geneva.

A U.N. Security Council mission to Burundi next week and an African Union summit in Ethiopia at the end of January will both increase the pressure for inclusive political talks, he said.