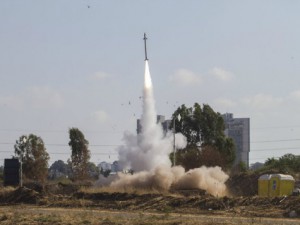 Israel has slammed the commission that penned the report, which was headed by Professor William Schabas before he stepped down, as being biased.

The report decried “unprecedented” devastation and human suffering in the terrorist enclave under Hamas control, during the terror group’s third attempt to wipe out Israel from Gaza, in 2014.

The Commission of Inquiry on the 2014 Gaza conflict announced it had gathered “substantial information pointing to the possible commission of war crimes by both Israel and Palestinian armed groups.”

“The extent of the devastation and human suffering in Gaza was unprecedented and will impact generations to come,” the chair of the commission, New York judge Mary McGowan Davis who was part of the infamous Goldstone Report, said in a statement.

The report decried the “huge firepower” used in Gaza, with Israel launching more than 6,000 airstrikes and firing 50,000 artillery shells during the 51-day operation. It noted that Arab terrorists fired 4,881 rockets and 1,753 mortars towards Israel.

“The fact that Israel did not revise its practice of air-strikes, even after their dire effects on civilians became apparent, raises questions of whether this was part of a broader policy which was at least tacitly approved at the highest level of government,” the commission said in a statement.

The commission also raised claims that a sense of “impunity prevails across the board for violations…allegedly committed by Israeli forces, whether it be in the context of active hostilities in Gaza or killings, torture and ill-treatment in the West Bank.”

The investigators urged Israel to “break with its recent lamentable track record in holding wrongdoers accountable,” giving backing to the claims made by Arab sources.

In an attempt to show some sense of balance, the report also decried the “indiscriminate” firing of thousands of rockets and mortars at Israel, which it said appeared to be have been intended to “spread terror” among Israeli civilians. The rockets were fired by terrorist groups at civilian population centers.

Following the release of the report, the UN council is to discuss the findings in a session next Monday.

“The UN commits crimes against humanity

“The UN Human Rights Council and the biased councils that it established are conducting crimes on a fixed basis against humanity when they rewrite history and warp the reality in which there is a country fighting to defend its children who are attacked with rockets by a terror organization acting from within a concentration of children,” decried Liberman.

The UN probe was originally headed by Canadian lawyer William Schabas, who was appointed despite having a long history of anti-Israel invective.

He stepped down from the investigation after it was revealed he had done contract work with the Palestine Liberation Organization (PLO) terror group.

In a report released last Sunday, Israel defended its conduct in last summer’s war against the Hamas terrorist group, detailing how its actions were fully in compliance with international law.

The UN has accused Israel of bombing several UN institutions, which Israel has documented were used to store and launch rockets by terrorists, as well as one UN clinic that was booby-trapped and full of terror tunnel entrances, and which detonated leading to the deaths of three IDF soldiers.

The IDF has charged that the UN ignored the realities of the fighting in Gaza, in which Hamas embedded its terrorist infrastructure in the civilian population while firing on Israel’s civilian population, thereby committing a double war crime.

Despite those difficulties, a report revealed Israel achieved a 1:1 civilian to combatant casualty ratio virtually unprecedented in urban warfare.