You are here: Home / Africa / UN peacekeeper killed, others wounded in Mali attack 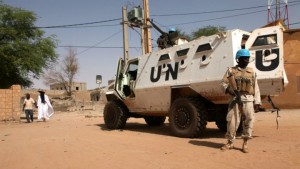 A UN peacekeeper was killed and eight others injured on Monday in an attack on their camp in northeastern Mali near the Algerian border, the United Nations said.

A peacekeeper from Chad was killed in the attacks at the Aguelhok camp in the region of Kidal, said a statement from Ban’s spokesman.

Following a spate of mortar rounds fired at the Aguelhok camp, two military vehicles were dispatched and hit an explosive device “that led to the death of a blue helmet,” MINUSMA said.

Northern Mali fell into the hands of jihadists linked to Al-Qaeda in early 2012.

France intervened in January 2013 to drive the Islamist fighters away from the north and the UN mission was deployed a few months later, but large tracts of Mali are still not controlled by domestic or UN troops.

Analysts say tribal rivalries have led to a deterioration of the security situation in the north.

Ban expressed concern over ceasefire violations by the armed groups that signed a peace deal for Mali last year.

A UN soldier was killed and four others were injured on August 7 when their vehicle struck an explosive device in Mali’s northeastern Kidal region. The dead soldier and the injured were from Chad.

A total of 32 peacekeepers from MINUSMA have been killed so far this year, according to the UN peacekeeping website.