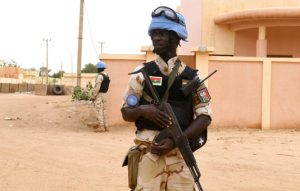 One peacekeeper was killed and five others were wounded Sunday when a roadside bomb exploded in strife-torn northeastern Mali, the UN mission MINUSMA said according to hindustantimes.com.

The peacekeepers were carrying out a security patrol near the town of Aguelhok when the device detonated, spokesman Olivier Salgado said on Facebook.

In January, 11 Chadian members of MINUSMA were killed in an attack by jihadists in Aguelhok.

That attack was claimed by the Group to Support Islam and Muslims (GSIM), which has sworn allegiance to Al-Qaeda in the Islamic Maghreb (AQIM).

The head of MINUSMA, Mahamat Saleh Annadif, “strongly condemned the recent increase in these kinds of attacks, especially in the centre” of the country, the UN mission said.

MINUSMA has lost more than 200 peacekeepers since it was set up in 2013, according to its website.

Salgado said unidentified gunmen on Sunday targeted UN peacekeepers near the central town of Bandiagara in a separate attack, with no casualties.

Northern Mali fell into the hands of jihadists in 2012 before the militants were forced out by a French-led military intervention.

But much of the region remains chronically unstable and jihadist-led violence has spread to the centre of the country, often sparking bloodshed between ethnic groups.