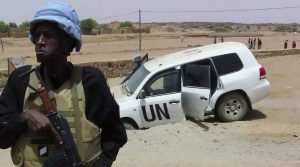 One peacekeeper deployed as part of the United Nations Multidimensional Integrated Stabilization Mission in Mali (MINUSMA) has died in a vehicle bombing in the north of the country, the mission said in a press release on Thursday, adding that another peacekeeper suffered serious injuries in the blast.

The incident took place at 13:30 GMT roughly 30 miles from the Malian settlement of Kidal, MINUSMA said, adding that the injured peacekeeper has been evacuated to receive treatment.

“MINUSMA will not be intimidated by these attacks. It will remain committed to supporting the people and the government of Mali in their efforts to establish lasting peace in the country,” Mahamat Saleh Annadif, the UN special representative to Mali, said in the press release.

MINUSMA was established in April 2013 to carry out peacekeeping and security operations in the African country amid an ongoing insurgency. UN peacekeepers are often targeted by militants, and five members of MINUSMA lost their lives in two separate attacks that took place in May and June.