You are here: Home / Africa / UN mission in Mali should also focus on smugglers 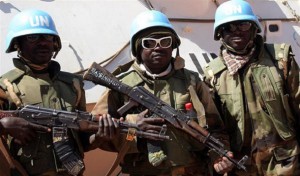 The UN peacekeeping mission in Mali should also focus on tracing human smugglers and dismantling smuggling routes, according to an MP from the ruling VVD in Monday’s Volkskrant. Parliamentarian Han ten Broeke writes in an opinion piece that Dutch soldiers in Mali who are there to collect information could also collate insights into human smuggling.
‘You can shoot the people traffickers boats to bits but not their business model,’ Ten Broeke writes. The UN mission in Mali needs to be given a broader mandate because smugglers are destabilising the country and frustrating the peace process. ‘The proceeds are used to finance terrorism and other destabilising activities,’ he writes.
The smuggling routes often operate through territory where the UN is active such as Chad, Somalia, Burundi and the Central African Republic, he points out. However, ‘making a serious job out of it will require more troops,’ the MP said.
The Netherlands has 450 soldiers, many of them commandos, in Mali. Most are in the north where they form the ‘eyes and ears of the UN’, the Volkskrant says. MPs from the VVD’s coalition partner PvdA say making life difficult for smugglers is integral to restoring stability to the area. However, the best solution is to improve the situation in would-be refugees’ own countries, Labour MP Michiel Servaes is quoted as saying.