You are here: Home / Mediterranean / UN Libya envoy threatens sanctions against those who bloc peace deal 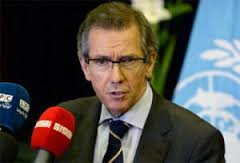 Libyan leaders working against a peace deal that is key to save the North African nation from the Islamic State terrorist group will face international sanctions, the United Nations envoy who is brokering talks warned in an interview Friday.

Libya is split between an internationally-recognized parliament in Tobruk and an Islamist-leaning assembly in the capital Tripoli. Earlier this week, an ultimatum was missed for the two sides to accept a national unity government.

“Some figures in the two camps of Tripoli and Tobruk are sabotaging the agreement,” Leon told Italian newspaper La Repubblica. “But the international community has decided that it cannot allow it. If the sabotage continues, sanctions will come,” he added.

“Everybody knows what this is about: travel bans, freezing of bank accounts and so on,” Leon said.

The Spanish diplomat said “the overwhelming majority” of military and political leaders were behind a peace deal, and have to “choose between putting Libya back on the path of stability or letting their country slide towards civil war and Islamic State terrorism.”

Leon said the Islamic State “is a serious threat, not just for Libya but for the entire Mediterranean. This is why the United Nations and the international community are pushing for the agreement to be sealed with no further negotiations or modifications.”

Libya has suffered from turmoil since a 2011 revolt toppled dictator Moamer Gaddafi, with a succession of governments unable to impose their authority over the numerous militias that arose during the uprising.