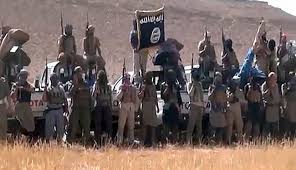 A United Nations report revealed on Tuesday that ISIS is still active through cells in several cities in Iraq and Syria that were under its control, like reported by aawsat.com.

It said that the Jaysh Khaled bin al-Walid group alone has some 700 to 1,500 fighters operating east of the Euphrates River.

Asharq Al-Awsat obtained a copy of the report, which also warned that the al-Qaeda terrorist network was still active and that its al-Nusra Front affiliate still boasts some 7,000 to 11,000 fighters.

The report said that ISIS had effectively lost all the territories it had controlled in Iraq and Syria, but it is now turning into “a global network, with a flat hierarchy and less operational control over its affiliates,” with some members willing to cooperate with al-Qaeda networks “to support one another’s attacks.”

As a result of the changing threat, the report said the fight against the extremist group is entering a new phase “with more focus on less visible networks of individuals and cells acting with a degree of autonomy.”

The report to the Security Council circulated Tuesday said ISIS “has lost its focus on conquering and holding territory” but is continuing “to give prominence to external attacks.”

“In future, it will focus primarily on a smaller and more motivated group of individuals willing to fight or conduct attacks,” the experts said.

While the group’s ability to generate revenue “was considerably weakened” by its losses, falling by more than 90 percent according to one unnamed country, ISIS may still be able to profit from oil and gas sales, extortion, and control of checkpoints. And the group is still able to send money to its branches “despite heavy military pressure.”

Al-Qaeda meanwhile, “has persevered” and it poses a “greater threat than ISIS in several regions,” such as Somalia and Yemen. Al-Nusra Front remains one of the group’s largest and most powerful affiliates.

In East Africa, despite ISIS’ expansion and activities being curtailed last year, the group has established underground cells in some regions of Somalia. But the al-Qaeda affiliate Al-Shabab is determined to ensure that ISIS does not eclipse it in Somalia.

The UN report highlighted global efforts to combat terrorism, noting Saudi Arabia’s hosting in November 2017 of the first meeting of the Defense Ministers of the Islamic Military Counter Terrorism Coalition. The 41-member alliance is dedicated to fighting ISIS.

Given the evolution of ISIS, experts said in some ways, individual countries and the international community now face “a more difficult challenge,” making it vital to share information on the identity of former fighters, their location and travel plans.

They said ISIS foreign fighters unable to blend into the local population may be trying to leave, making their identification critical.

“ISIS has collected travel and identification documents from incoming fighters for potential use in future travel and has obtained several thousand blank Syrian passports,” the experts said. While the numbers have been reported to INTERPOL and are in their database, “member states highlighted that their use by returnees or relocators is possible.”

The experts said countries bordering Iraq and Syria have highlighted “continued challenges” in identifying ISIS foreign fighters seeking to return home or relocate, as well as those on the UN sanctions blacklist.

The report urged greater use of biometric data, fingerprints and high-quality pictures to identify ISIS fighters.

It noted that the flow of new foreign fighters to Iraq and Syria “has almost come to a halt.”

In the past six months, the experts said, governments and organizations at all levels have continued to strengthen cooperation with the private sector on sharing sensitive information on terrorism-financing patterns and suspect individuals.

This has enabled “law enforcement authorities to disrupt travel by foreign terrorist fighters, detect terrorists and individuals associated with terrorism networks and bring terrorists to justice,” the report said.

“Nonetheless,” it said, “financial intelligence in the possession of entities in the private sector remains underused in many regions of the world.”