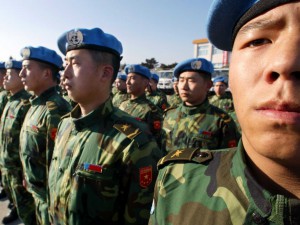 In an interview with Xinhua, Koen Davidse, Deputy Special Representative of the Secretary General in MINUSMA, said “Chinese troops have set an example of professionalism and efficiency that we hope other countries will emulate.”

“I have been often with them, and I know Chinese peacekeepers are performing very well and their work is impeccable,” said Michael Lollesgaard, a Force Commander in MINUSMA.

In 2012, a military coup and armed attacks against the government plunged Mali into chaos and violence, with the northern part most hit.

Although a peace agreement was signed in June 2015, certain cities in the north such as Kidal are still controlled by the the mainly Touareg rebel group, Coordination of Azawad Movements.

In 2013, China sent peacekeepers to Mali and currently nearly 400 Chinese peacekeepers are carrying out various UN missions in the northern town of Gao which is still facing numerous security challenges.

Davidse said Chinese engineer, medical and force protection units had all done a perfect job and built good relations with the local population.

“I am impressed by the unique relation between Chinese troops and the population of Gao, they support numerous schools in Gao by providing medical support, something that is recognized and appreciated by the population,” the UN official said.

China has stepped up its peacekeeping efforts globally in the past two decades.

In September, Chinese President Xi Jinping announced at a UN summit that China would contribute 8,000 troops for a UN peacekeeping standby force.

He also pledged that China would provide military aid worth 100 million U.S. dollars to the African Union (AU) to support the establishment of the African Standby Force, Africa’s peacekeeping troops.

Lollesgaard described China’s support to AU as “very timely and significant,” as part of the continent still grapples with insecurity.

“We need a friend such as China to support us to build the African Standby Force, and to help us ensure peace on the continent,” added Mama Sanni, a Beninese peacekeeper serving under MINUSMA.

China is also set to deploy its first helicopter detachment to UN peacekeeping missions in Africa.