You are here: Home / MidEastGulf / UN envoy to visit Syria for peace talks 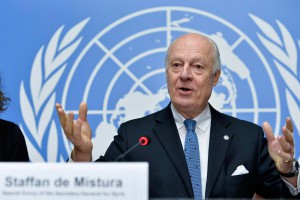 The UN’s special envoy to Syria is set to travel to the Arab country to hold discussions with the Syrian foreign minister concerning a peace plan aimed at helping resolve the ongoing deadly crisis there, a Syrian official says.

The senior government official, whose name was not released, told AFP on Wednesday that Staffan de Mistura will meet Walid al-Muallem in the Syrian capital city of Damascus on Thursday to answer the questions of the Syrian official regarding the UN-proposed peace plan.

In mid-August, Ramzy Ezzedine Ramzy, de Mistura’a assistant, handed Damascus a 60-page document summarizing the initiative. A diplomat in Damascus, who was also speaking on condition of anonymity, said that the Syrian authorities had then asked a series of questions regarding the document and were awaiting answers.

The plan proposes the formation of four working groups, made up of people chosen by the Syrian administration and the opposition, to discuss “safety and protection, counterterrorism, political and legal issues and reconstruction.”

The diplomat further said that the Syrian government was demanding that the fight against terrorism be a priority for the political process in the violence-wracked state.

De Mistura’s Thursday visit will be his sixth to Damascus.

Syria has been battling ongoing militancy since March 2011. The violence fueled by terrorist groups has so far claimed the lives of over 250,000 people.