You are here: Home / Africa / UN envoy says peace process is ‘back on track’ in Mali 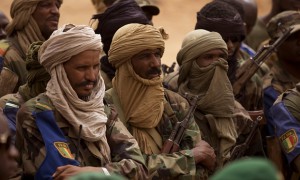 The U.N. envoy for Mali said “the peace process is back on track” after violence in August threatened to disrupt an agreement between the government and separatist rebels.

But Mongi Hamdi told the U.N. Security Council that “vigilance will be required as the peace process remains fragile.”

Following confrontations near the Algerian border at the beginning of September that severely threatened the peace process, Hamdi said he brought together the top military leadership of pro-government militias and Tuareg and Arab rebels for the first time.

He said they agreed to cease hostilities, return to their positions prior to the June 20 peace agreement and return to the peace process.

Hamdi said he was pleased to report “that the cease-fire and the terms of these agreements are now holding.”

Mali’s northern half fell to Islamic extremists following a military coup in 2012. A French-led military intervention drove them out of major towns, but north and central Mali remain insecure.

Hamdi recalled that when he last addressed the council in June he said the path to peace “would be littered with obstacles.” Since then, he said, the difficulties have been “more significant and have emerged more rapidly than what was expected.”

He said it is critically important that the international community remain engaged to prevent any escalation of violence and bring the peace process back on track.

The U.N. special representative also told the council the peacekeeping mission is seeking to deploy longer range drones to free up troops being used to protect supply lines.

This would help the mission expand its presence in key areas of the north, Hamdi said.