You are here: Home / Europe / UN condemns escalation of hostilities in Western Libya 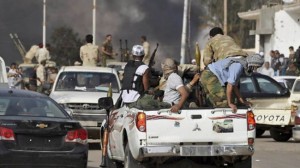 The United Nations Support Mission in Libya (UNSMIL) on Saturday condemned an upsurge of armed conflict in western Libya, especially in Warshafana region, expressing concern for the locals who have been kidnapped and tortured.

UNSMIL said in the statement that it is concerned “over the hardship endured by the inhabitants of Warshafana, many of whom have been displaced, abducted and tortured, and they are in dire need of humanitarian aid.“

The mission called on all parties to the conflict to immediately cease the hostilities and ensure the right of all those displaced from the area to return home.

The mission noted that amid “significant progress” which is being made in the UNSMIL-facilitated Libyan political dialogue process, the sides to the Libyan conflict should resist “from taking any military actions or decisions that could constitute a provocation.”Libya has been in crisis since the 2011 overthrow of long-term leader Muammar Gaddafi and the subsequent civil war. There are currently two rival governments in the country, one in Tripoli and one in Tobruk. The forces of the internationally-recognized Libyan government in Tobruk are fighting numerous rebel groups, including Islamic State-affiliated militants.