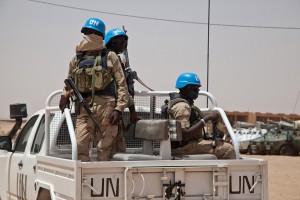 UN Secretary-General Ban Ki-moon has recommended that 40 military observers should be sent to Mali to monitor the ceasefire agreement between an alliance of Tuareg-led rebels and the Malian government.

Ban also urged the UN Security Council to consider blacklisting people who violate the peace accord.

The UN chief in a report stressed the need for for the Security Council to authorise the military observers when it renews the mandate for the UN peacekeeping mission in Mali, known as MINUSMA, which expires on June 30.

Ban stated: “To reinforce this effort, the UN Security Council may wish to consider the introduction of sanctions against the perpetrators of ceasefire violations.” The Tuareg-led rebels and the Malian government signed a peace deal on Saturday meant to draw a line under a 2012 uprising and allow the authorities to focus on tackling Islamist militants in the desert north.

Malian Foreign Minister Abdoulaye Diop told the Security Council that the government needed to know more about the plan for ceasefire observers, adding that “greater clarity would enable us to move forward”.

Also, the UN envoy to Mali, Mongi Hamdi, told the Council that northern Mali was one of the most difficult environments for peacekeeping given its size, harsh climate and non-existent infrastructure.

Hamdi said: “To compound the situation, violent extremists and other enemies of peace continue to indiscriminately attack our forces and camps.

“It is therefore critical that troop- and police-contributing countries have the capacities and capabilities required to operate safely and effectively in such an environment.”

On his part, the UN force commander in Mali, Danish Major-General Michael Lollesgaard said last week that his troops were not equipped to fight a guerrilla war that has killed dozens of peacekeepers, making it the deadliest UN mission.

France has expressed its desire to strengthen cooperation with the UN mission in Mali, in order to boost its capability.