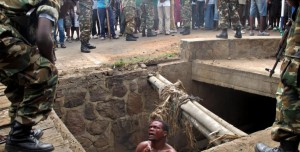 UN Secretary-General Ban Ki-moon called on Wednesday for urgent talks to avert civil war in Burundi as the central African country defended the actions of its security forces and rejected any idea of stationing foreign troops on its soil.

Ban said he would send his special adviser Jamal Benomar to the region for talks with the Burundi government, other countries and the African Union on ways to defuse a crisis that has spurred fears of a return to full-scale ethnic conflict.

“An inclusive political dialogue is needed urgently. We must do all we can to prevent mass violence and act decisively should it erupt,” Ban told a news conference in New York.

“What we have seen over the past few days is chilling.”

In the worst clashes since a military coup was foiled in May, insurgents attacked military camps in the capital Bujumbura on Friday, and nearly 90 people were killed in the ensuing violence.

Burundi, whose crisis pits supporters of President Pierre Nkurunziza against those opposed to his serving a third term in office, rejected the criticism of its security forces.

“The security forces intervened with the greatest possible professionalism,” it said in a statement late on Tuesday. “It would therefore be irrelevant to talk of bringing foreign forces into Burundi.”

“Those who recommend it hide many other intentions,” said the statement, issued by a government spokesman.

The United Nations and the African Union have started preparing for the possible deployment of international peacekeepers in case the violence worsens. Such a move would require authorisation by the Security Council.

However, US Ambassador to the United Nations Samantha Power, president of the UN Security Council for December, said on Wednesday there had been “insufficient contingency planning.”

“Many council members are very eager to see the pace of contingency planning by the UN accelerated,” Power told reporters.

Burundi has accused neighbouring Rwanda and some Western nations of meddling in its affairs, saying they are stoking the crisis.

Western powers are concerned that Burundi, which only emerged from a civil war in 2005, could plunge back into ethnic conflict, destabilising a region that witnessed a genocide in Rwanda in 1994.

Like Rwanda, Burundi has an ethnic Hutu majority and a Tutsi minority.