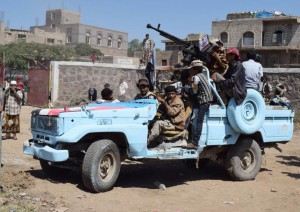 UN Secretary-General Ban Ki-moon expressed his concerns about the intensified Coalition airstrikes and ground fighting and shelling in Yemen, despite repeated calls for a renewed cessation of hostilities, said a UN spokesman at Friday’s daily briefing.

Ban is particularly concerned about reports of intense airstrikes in residential areas and on civilian buildings in Sana’a, including the Chamber of Commerce, a wedding hall and a center for the blind, said UN spokesman Stephane Dujarric.

Moreover, Ban reminded all parties of the utmost necessity to respect their obligations under international human rights law and international humanitarian law, which prohibit attacks directed against civilians and civilian infrastructure, said Dujarric.

Secretary-General Ban called on all parties to the conflict in Yemen to engage in good faith with his Special Envoy for Yemen in order to convene a new round of peace talks as soon as possible, said Dujarric.

The UN Secretary-General’s Special Envoy for Yemen, Ismail Ould Chiekh Ahmed, arrived in Riyadh, Saudi Arabia, Friday, where he will meet Vice President and Prime Minister of Yemen Khaled Bahah and the Government of Yemen delegation to talks, leaders of Yemeni political parties, as well as senior officials of the Kingdom of Saudi Arabia, according to a note given by the Office of the Spokesperson for the Secretary-General.