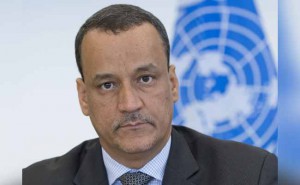 Peace talks between Yemen’s warring sides came to an end on Sunday, December 20, as fierce fighting wracked the country and the United Nations blamed “numerous violations” of a ceasefire agreement, the Associated Press reports.

Speaking at a news conference in Bern, UN special envoy Ismail Ould Cheikh Ahmed said the talks between the internationally recognized government and Shiite rebels were hindered by violations of the truce that went into effect last Tuesday.

“There was noticeable progress but not enough to reunite Yemen … unfortunately there were numerous violations (of the cease-fire),” he told reporters, adding that the two sides had agreed on a framework for further negotiations on Jan. 14 at a venue to be determined.

“It’s very clear that unfortunately, the ceasefire that was agreed upon as I said earlier wasn’t respected, and in some cases was violated from the first hours, even of these talks,” he said.

Both sides broke the cease-fire during the peace negotiations that began Tuesday in the Swiss village of Macolin.

The Yemen conflict pits the internationally recognized government backed by a Saudi-led, U.S.-supported coalition against the rebels, known as Houthis, who are allied with a former president and backed by Iran. Local affiliates of al-Qaida and the Islamic State group have exploited the chaos to grab land and exercise influence.