You are here: Home / MidEastGulf / Ukraine’s plans to join fight against ISIS may mean face-off with Russian forces in Syria

Ukraine has drawn up plans for a potential military contribution to the fight against ISIS in Syria in a move that could also pit its troops against Russian forces in the Middle East, according to The Independent. 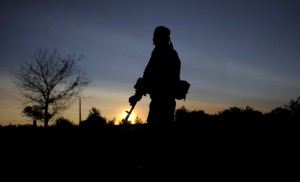 An options paper drawn up by Ukraine’s defense ministry is to be discussed this week during a visit by U.S. Defense Secretary Ash Carter, who has been touring the world gathering support for the war against the extremist jihadist group, The Independent reported.

According to those who have read it, the paper – produced at the behest of Ukrainian President Petro Poroshenko – highlights the possibility of Ukrainian forces coming up against Russian forces in Syria, and details potential contributions.

A Ukrainian government source said: “We have prepared a range of options for our support against ISIS including in Syria, which could include troops. It could result in potential clashes with Russians.”

Ukraine’s battle-hardened armed forces would relish such an opportunity. Ukraine has four special forces regiments and a further unit of its Defense Intelligence Department – a total of 7,000 troops. It also has highly capable airborne troops, part of a mobilized army numbering 200,000, of which 40,000 are always on the country’s eastern front facing pro-Russian rebels.

However, the article mentions that any troop deployment into Syria would be controversial in Kyiv, and require a parliamentary vote, with some arguing that Ukraine needs to focus on the rebels who pose a continuing threat in its east, despite the current military deadlock. It might also prove controversial in Europe.

A senior military source in Ukraine’s capital said: “I would see a lot of hand wringing at NATO in Brussels.”